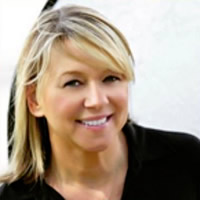 Erika Lupo is the Founder and creative force behind the Acting-A-Part® brand and AAP Franchising®. We are in our 16th year at Acting-A-Part. Erika launched her successful company after completing 10 years as a certified English teacher in Ramsey and Maplewood, School Districts of New Jersey. While teaching, she developed and established the Middle School Theater Program in both NJ School Districts. Her efforts earned her a nomination for the prestigious NJ “Best Practice” Teaching Award in 2001. In addition, Acting-A-Part® is a franchise! Offering our state of the art theater and film schools throughout the United States! We have also launched our own make up line and apparel! They can be found at our theaters.

Her Acting-A-Part® program can best be summarized by Whether the purpose is for a student is to turn professional, or simply the enjoyment of stage or film acting, the exposure to an Acting-A-Part experience will bring out his or her theatrical skills, and self confidence and self esteem. Erika will be hosting her own radio show on AM970 featuring women entrepreneurs beginning August 2016

Erika has directed and produced over 100 stage productions including and not limited to Bye Bye Birdie, Sound of Music, Footloose, Guys and Dolls, Oliver, Fiddler on the Roof, The Wizard of Oz, Our Town, Annie, High School Musical, Grease, Lion King, Peter Pan, Little Shop of Horrors and Beauty and the Beast. Erika writes her own movie and stage scripts. She holds a BFA from Roger Williams University in Creative Writing and Theater and a Graduate Degree in Teaching from William Paterson University.

Acting-A-Part® has evolved into a creative force in New Jersey and has grown to include “Original AAP® Short Films. Erika has her own film crew and film editors. Her first student-produced Film Festival at the Sussex County Technical School was a big hit in 2012, well received by a large crowd of acting enthusiasts. In addition, she hosts several film festivals throughout the year, showcasing her workshop films.  One of her AAP student films, “Very Different Times,” was featured at the 2011 Garden State Film Festival. She can be found on the International Movie Database (IMDB). www.actingapart.com and aapfranchising.com

AAP® hosts Acting Birthday parties Acting-A-Part collaborates with several schools districts and brings her phenomenal programs to their stage. In addition, she has created a program for children with special needs, that had been implemented at The Park Lake School in Rockaway Township in NJ.  In addition to Acting-A-Part’s two successful locations in Sparta, NJ and Ridgewood, NJ AAP’s program is offered at Reverend Brown School, Sparta NJ

Acting-A-Part® is now a national franchise offering our innovative programs and workshops across the nation. We were recently featured in Investment News with Erika earning the cover and the photo shoot spread inside the magazine as well as online.  We are a creative force in the industry and plans to franchise internationally are being considered. Erika was featured on the Small Business Franchise Show three times on AM970 The Answer. and now is the host of her own radio show Women in the Loop with Erika Lupo which airs on Saturdays on AM970 at 6:00 AM and is available as a podcast nationally. 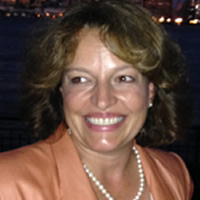 Thomasina is pleased to join Erika Lupo and the talent that is AAP®. While having a love for the Arts, it is her wealth of organizational and business leadership skills that she brings to AAP®. She has a BA in Communications and a Minor in Business Finance from Fairleigh Dickinson University. Her background stems from 17 years of corporate work experience with Fortune 500 companies, the last 10 as a Project Manager with Lucent/Bell Labs in the Wireless R&D Division. Most recently as a volunteer at Reverend Brown School serving as the President of the Parent Guild. While working as a Project Manager in the Telecommunications Industry she traveled frequently for business, domestically and internationally, living in London for a semester garnering experiences she hopes to apply assisting AAP Franchising, LLC grow globally.

While her professional background is business, she loves the Arts herself. She studied music and dance since the age of 5, and played piano for 13 years under a Juilliard instructor. She plays today for her own personal enjoyment and has recently taken up learning the harp.

She lives locally with her husband and son and can be contacted via email at: aapbusinessmanager@gmail.com/973.879.3650 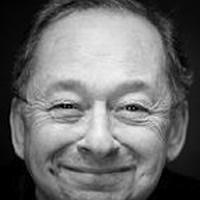 Otto Salamon is a Golden Globe and Emmy nominated writer and producer. He has worked with several Academy Award actors and actresses, as well as represented them as their agents! He is a former talent agent for the William Morris Agency and was a professor of film production at the New School in New York City for 14 years. Otto Salamon has produced movies for NBC, Showtime, Columbia Pictures and PBS. He is a member of both the Writers Guild of America and the Director’s Guild of America. Otto, a Holocaust Survivor, has just completed his autobiography on his experiences. Otto Salamon can be found on IMDB.com (Internet Movie Database). 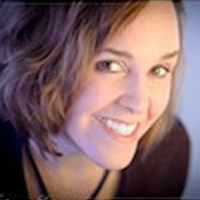 Kelly Dacus-Smith graduated from Webster Conservatory in St. Louis, Missouri with a BFA in music theater. She then lived and worked in New York City for more than sixteen years. During her performance career, she has toured nationally with Blues Clues Live. and Dora the Explorer Live. Having performed at New York City’s Radio City Music Hall and Los Angeles Kodak Theater. She toured the high seas while dancing with Holland America cruise lines and toured Europe while performing Kristine in A Chorus Line. Other favorite roles performed include Val in A Chorus Line, Gladys in The Pajama Game, Celia in Shakespeare As You Like It and Popeye in The Miss Firecracker Contest. 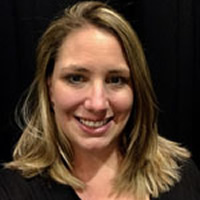 Jaime Villani is excited to be back directing at Acting-A- Part. Jaime Villani currently runs the Theatre Arts program at Sussex County Technical School. Previously, she was at Teaneck High School for 12 years where some of her credits include: Grease, Little Shop of Horrors, Arsenic & Old Lace, In the Heights, Rehearsal for Murder, RENT, Rumors, and many more. Jaime is Treasurer of The Speech and Theatre Association of New Jersey, as well as, recently was commissioned to write a Performing Arts Contest for SkillsUSA. Prior work included directing and stage-managing for All Children’s Theatre, Charles Sellar Foundation’s Talent Time, The Lyric Stage Company of Boston, City Center’s Group Tours Productions and Emerson Stage of Boston. Jaime Villani is an alumnus of Emerson College (undergraduate) and Montclair State University (graduate). 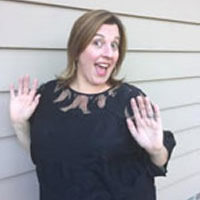 Danielle Wilkinson has been interested in the theatre since the 6th grade when she played the Scarecrow in “Wizard of Oz.” She turned her passion for the stage into a passion for film and television and has been working as a Producer, Casting Director, Talent Developer and Development Producer for over 15 years. She started with a small agency in NYC getting coffee and opening envelopes and has since worked at NBC, ABC, FOX, BRAVO, TLC, E!, The FOOD NETWORK working on shows like “Queer Eye for the Straight Guy,” “Say Yes to the Dress,” “Tim Gunn’s Guide to Style,” and “Real Housewives of DC.” She has cast some of hottest hosts on television and has developed and helped sell several TV shows to TLC, LIFETIME and OXYGEN. Danielle has been working on and off with Acting A Part for over 6 years and is so excited to finally be joining the team. Her sense of humor and true love of creating comes through in all of the work she does. She graduated with a degree in Theatre from The Catholic University of America and resides in Sparta with her husband and 2 daughters. 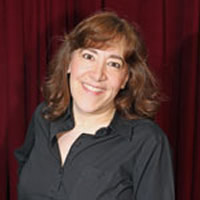 Leigh Weinman is pleased to add her musical talent to the many wonderful productions of the Acting-A-Part® Theater Company. In addition to her experience as an accompanist and music director, she has been teaching piano in Morris County for more than 20 years. Miss Leigh, as she is known by her students, enjoys nothing more than sharing her love of all forms of music, and she is especially passionate about collaborating with burgeoning young performers as they discover the thrill of musical theater while they develop and engage their talents. Leigh started her own journey in the theater during her high school years, which included a memorable opportunity to perform in the pit ensemble for a summer theater production of Pippin. It was this experience that instilled her long standing love of the art and the joy of the kinship that musical theater inspires. Most recently, she has performed as both a sole accompanist and as part of a pit ensemble for local middle school and high school productions, including Grease, Peter Pan, Seussical the Musical, The Sound of Music, Charlie and the Chocolate Factory, Annie, and The 25th Annual Putnam County Spelling Bee. Leigh is proud to be a part of the Acting-A-Part® family. 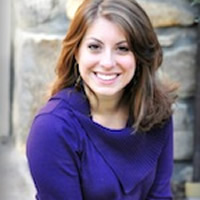 Kristin Jackson is excited to be part of Acting a Part® After years of teaching Pre-Kindergarten, she’s returning to the world of children’s theater. Kristin has studied theater for years and has worked with improvisation, scene study, movement, mime, directing, neutral masks and commedia del arte. She holds a BA in Theater and a CE in Early Education. Favorite stage credits include Harpagon in THE MISER, Edith in ‘DENTITY CRISIS, Alice in THE MATING OF ALICE MAY, Helen in BABY WITH THE BATHWATER and Puck in A MIDSUMMER’S NIGHT DREAM. Directing credits include THE HO– USE OF BLUE LEAVES, THE MIDLIFE CRISIS OF DIONYSUS, THE LION, THE WITCH AND THE WARDROBE, FIDDLER ON THE ROOF JR., ONCE ON THIS ISLAND JR., THE HOBBIT and ALICE IN WONDERLAND. She has directed numerous improvisation pieces and has performed at the New Jersey Performing Arts Center. She taught various children’s theater courses and supervised summer camps at Brundage Park Playhouse. She also worked with Centenary Performing Arts Guild as a Resident Teaching Artist, and stepped in as an adjunct in the theater department of the college. Kristin currently resides in Sparta with her husband, daughter and two dogs.